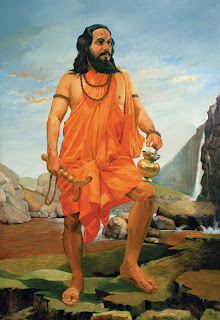 Guru Samartha Ramdas (1608-1681) devoted his energies to establishing what he called Maharashstradharma, using religious faith to install a sense of integrity and greatness in the Maratha people. He became the guru of Shivaji, the founder of the Maratha empire, who drove the Mughal conquerors from Maharashtra.

The Dasbodha is his magnum opus. This huge work of 7752 ovis (verses) was compiled between 1659 and 1681, and is a compendium of advice for his followers.

There is an English translation by W.G.Tambwekar (1902).  Partial summaries in English are in V.H.Date's Spiritual treasures of St.Ramdasa (1975) and V.S.Kanvinde's Dasbodha (1963). Several more recent translations, partial and full, are available on the web, include one in the Internet Archive.

The earliest writings of Ramdas are the Karunastakas ("Pathetic verses"). An English summary is in Date’s Spiritual treasures of St.Ramadasa (1975).

There is also the Manache Shloka ("Verses addressed to the Mind"),  sometimes  known  as  Manobodha,  which  remains  popular,  being  sung  by  the followers of the Ramdasi movement.

He who is the peoples’ Lord
Master of all qualities, whose cosmic time-wheel spins the worlds
We bow to Him on whom is rooted our four-fold body sounds
May this eternal path of devotion to Raghawa be dear to all.

My gentle mind, go by this path
of bhakti, which brings God’s love
Give up all that people despise
Do what is praised with all your might.

Rise early and think of Rama
Say prayers first, then speak to men
Abandon not this rule;
Who follows it is blessed in the world of men.
(1-3; trans. M. Noyce)

His closest disciples, Kalyan and Uddhav, wrote nothing (HML 31), but there are some followers of Ramdas who have left writings, such as Dinkar Gosavi and the poetess-saint, Venabai.

from John Noyce,  The Saints of Maharashtra (2017)
Posted by John Noyce