Tie him up
Pamela (Bromley) gave me my realisation in her house/ashram in Brighton in 1983. After having raised my kundalini, I heard a voice say from behind 'ok, tie him up' followed by the clunk, clunk of those metal bangles Pamela always wore... 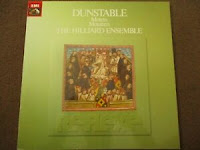 Music
I came into Sahaja Yoga in England (Brighton) in 1983. It took a while before I felt any vibrations. I first felt vibrations listening to two pieces of very different music. The first was the Irish group, U2, live at Red Rock in the USA (where the thunder joined in the performance); and the second was an LP of the music of a medieval composer, John Dunstable. So I mentioned this to another yogi who was a national trustee. She borrowed the LP and when she next went to London to see Shri Mataji, she played some of the music. The LP was returned the next week with the comment 'Mother says he's a realised soul'. The LP is the classic album of Dunstable's music by the Hilliard Ensemble. A sample  (and yes, I still have the LP)

Black clothes
(fb comment) This is something of a case study in understanding the context in which the comments were made and the events being refered to. In early 80s England, Shri Mataji was trying to get the yogis to look at life in a positive way - difficult to do when the clouds obscure the sun for days on end during the winter - and She pointed out the tendency of the English at the time to wear black or grey clothes, and to eat dull rather bland food. And yes we did. Part of the culture of the day. Of course much of that has changed 30 years later.  As others have said, be your own master and make your own decisions.

Coca cola
In 1983/84, there were two pujas in London at the Temple of All Faiths in Hampstead where a can of coke was passed from the back of the hall through the yogis to the front where it was poured into a glass for Shri Mataji to drink. The first time it was a red can (ordinary coca-cola), and the second time a silver-grey can (diet coke). For months and years after, some English yogis would insist on drinking coca-cola because "Mother drinks it". I remember, as a new yogi, saying to some of these early yogis, "but Shiva consumed the poison, didnt he?" and getting some very odd looks...
Steve Wollenberger (fb): I recall on a puja weekend in the US someone asked Shri Mataji about Diet Coke, as She drank it quite often. She responded with something like "I have to consume all the poisons, don’t I?"

Freemasons
I was at Shri Mataji's house in Brompton Square in London (probably in 1984) when Shri Mataji was given a book that was an expose of the freemasons. Whilst She was reading the book something attacked from the left side which received the Goddess's full glare, and then a few minutes later, a second attack (which got a mere glance). Only four yogis were in the room, of which one then went out to burn the book. (the logic of which escaped me then, and still does).  I remember Shri Mataji saying, in reference to the freemasons, that you cannot worship God and Satan at the same time. You have to make a choice.


Mixed Message
I  remember in early 1985 all SYs were asked to shoebeat Dr.W... and his research, which we did in the UK. In mid 1985 I visited Australia where the request had been received but somehow it had got scrambled. In the UK we were shoebeating negativity attacking Dr.W  and his research. In Australia yogis were shoebeating Dr.W as being negative. He must have received some mixed messages vibrationally...

Navaratri 1985
I was in the cable car on the way down after the Havan, and Shri Mataji was laughing as the wind moved the cable car around.

India Tour - 'On the buses' 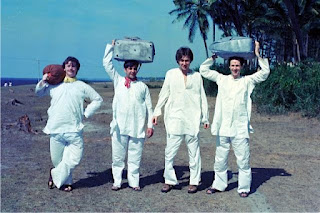 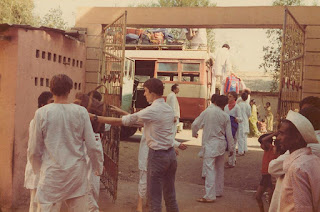 Back in the 1980s, for 4-6 weeks each year several hundred western yogis would tour Maharashtra in a convoy of buses, living out of suitcases, which were stored on the top of the buses, and had to be unloaded at each campsite, and then loaded again the following morning. So the suitcases used tended to be old, cheap, but robust, and increasingly battered as the tour progressed. It was therefore a surprise to many yogis when one year an English yogi turned up with a set of high fashion leather suitcases more suited to five star hotels. We practiced yogic detachment in many ways on those tours. David learnt detachment that year watching his expensive luggage being repeatedly manhandled off and on the buses, dropped into mud in the dark, etc...
MSC: thank you for not remembering anything about the luggage of the sisters...
JN: how could the men forget the shopping trips to Kolhapur which always led to heavier suitcases later in the tour, year after year.

Miracle photos
Thirty five years ago on India tour, long before the digital age, an Indian yogi gave me a copy of a miracle photo he had taken which showed a shaft of light above Shri Mataji's head. On closer inspection it became obvious that Shri Mataji was standing in front of a building, and in particular in front of a vertical pipe that was reflecting the flashlight from the camera.
Nourish the Left Side
On my first India Tour in the mid-80s I went to bow to Shri Mataji (as everyone else was doing) and She thumped me on the back (centre heart) and said 'left into right'. That came as a surprise to those yogis who had been working on me and had been using right into left and watching me fall asleep whilst they were working on me. So my conclusion was/is that right-sided types need to nourish/strengthen our left side.

Sugar
In the early 1980s when Shri Mataji was in London and dealing with some very damaged yogis, She observed that some yogis who were using white sugar in their liver diets were improving and others, also using white sugar, were not. The difference turned out to be that cane sugar worked, beet sugar did not. At the time most white sugar available in England and virtually all white sugar in western Europe was beet sugar (ie grown below ground). White cane sugar (grown above ground) was imported from Australia and the West Indies and was hard to find. English yogis when travelling in Europe at this time would often travel with a bag or two of white cane sugar to give to families they were staying with – always gratefully received.
Vibrational Awareness
CM: In support of Michael’s comment; I remember once at Caxton Hall; that three of us were working on a new person. Mother came up and asked what was the problem, one yogi held up a finger; it is Nahbi problem; Mother immediately responded; no that is you; you should be feeling the vibrations of the other person; not your own! So yes; one may feel vibrations; but it is our discrimination that should be improved.
JN: Colin's memory from Caxton Hall in turn jolts my memory. Sitting in meditation with 300 others in a SY public program in a palace in Venice in 1986. Over the loudspeakers came a clearly audible conversation.
WR: Mother, they're catching on nabhi.
Shri Mataji: no, thats you.

Just for the record, the first official Sahaja Yoga school in the West was the school in the Kew ashram in Melbourne, Australia, which gained state approval in 1984 and continued until mid-1986 when the Australian national SY leader closed it and moved the school to Sydney. (to please his wife)
The closure happened just after I arrived in Melbourne. It was sad to see how helpless the parents were. All they could do was buy as many of the school's books as they could and hope the school would reopen, which never happened. Many of the parents either withdrew or were  expelled from Sahaja Yoga for questioning the national leader's decision.   The Melbourne collective went from 150 in mid 1986 to 70 in early 1988 by which time so many had been thrown out that the collective couldnt afford to continue leasing the Kew ashram building which then itself closed.

Biscuit
The Miracle of the Biscuit, Melbourne 1987.
Shri Mataji was waiting for Her flight at Melbourne airport at the end of Her Visit, Abraham (the youngest one) offered Her his partly eaten biscuit. Shri Mataji then gave a piece of the biscuit to each of the children and returned the biscuit to Abraham in exactly the same partly eaten form in which he had given it.
https://www.flickr.com/photos/sahajhist/sets/72157631750368134/

Candle havans
Candle havans were first used by yogis in Hong Kong (China) in the mid 1990s, and then soon after in Russia, both had some valid reasons for doing so, but hey: ego and superego... Nothing like a good fire for clearing negativity.

Access to Burwood ashram in Sydney during the 2006 and 2007 Australian visits was restricted to the elite. I remember after one puja going back to Burwood and gaining access because we were with the wife of the then Australian leader. All very spontaneous and good fun at the time. But I later heard many stories from yogis of access gained and access denied based on who they knew. It should also be said that some attempt was made by the Australian leadership both years to allocate access on specific days to various groupings of yogis, geographically, by age, by interest. But it always ended up as access through who you knew...


Matka treatment
In the original version of the matka treatment, as taught by Shri Mataji, the lemons and chillis are sprinkled with a little vibrated water. There is no need to fill the matka pot with water. What purpose would it serve?