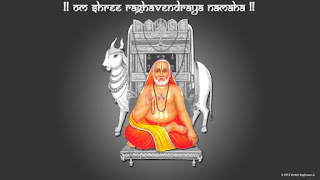 This South Indian mystic, also known as Raghwindra Swami,  was born, c.1595, as Venkatanatha to Kannada-speaking parents in the town of Bhuvanagiri in what is now the state of Tamil Nadu. He entered the Sri Mutt (or matha; Tamil: monastery) in Kumbakonam where he adopted the name Raghavendra Theertha. Raghavendra succeeded his guru Sudheendra Theertha as the head of the Sri Mutt (1624 to 1636). He travelled all over South India expounding Madhvacharya's Dvaita philosophy.

Raghavendra entered samadhi at his mutt (monastery) in Mantralayam on the bank of the Tungabhadra river, on the border of Andhra Pradesh with neighbouring Karnataka.  The shrine built around the samadhi continues to be an important place of pilgrimage.

Shri Mataji Nirmala Devi, when speaking to a Sahaja Yoga public program in Chennai in 1991, commented:

This is a very special time you are all born, where people have to get their Self-realization. … lots of prophecies have been there in our shastras about these times, but specially Bhrigumuni in Nadigranth has described about these times. If you tally them with the timing of today, it is exactly this time. After the death of Raghwindra Swami this will happen, and that's what is happening now. For you people it is very important to understand that Raghwindra Swami was in this area and he did a lot of work, and now the time has come to complete his work.  (1991-1207)