Joachim of Fiore (Gioacchino da Fiore) was an Italian Christian abbot who proposed a three-age (status) theory of the world which has resonated down the centuries in much of the apocalyptic and prophetic activity in Christian Europe. 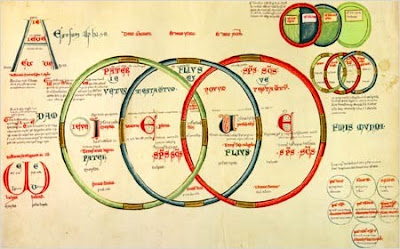 Joachim of Fiore in his Liber Concordie, part of his Expositio in Apocalypsim (begun in 1183), Chapter 5, f. 5r-v, states:

The first of the three status of which we speak was in the time of the Law when the people of the Lord served like a little child for a time under the elements of the world. They were not yet able to attain the freedom of the Spirit until he came who said: “If the Son liberates you, you will be free indeed.”
The second status was under the Gospel and remains until the present with freedom in comparison to the past but not with freedom in comparison to the future.
The third status will come toward the End of the world, no longer under the veil of the letter, but in the full freedom of the Spirit when … those who will teach many about justice will be like the splendour of the firmament and like the stars forever.
In that [third] status the Holy Spirit will seem to call out in the Scripture “The Father and the Son have worked until now; and I am at work.” [Joachim’s version of John 5:17]

The letter of the Prior Testament [Old Testament] seems by a certain property of likeness to pertain to the Father. The letter of the New Testament pertains to the Son. So the spiritual understanding that proceeds from both pertains to the Holy Spirit. Similarly, the order of the married which flourished in the first time seems to pertain to the Father by a property of likeness, the order of preachers in the second time to the Son, and so the order of monks to whom the last great times are given pertains to the Holy Spirit. According to this, the first status is ascribed to the Father, the second to the Son, the third to the Holy Spirit, although in another way of speaking the status of the world should be said to be one, the people of the elect one, and all things at the same time belonging to Father, Son, and Holy Spirit.